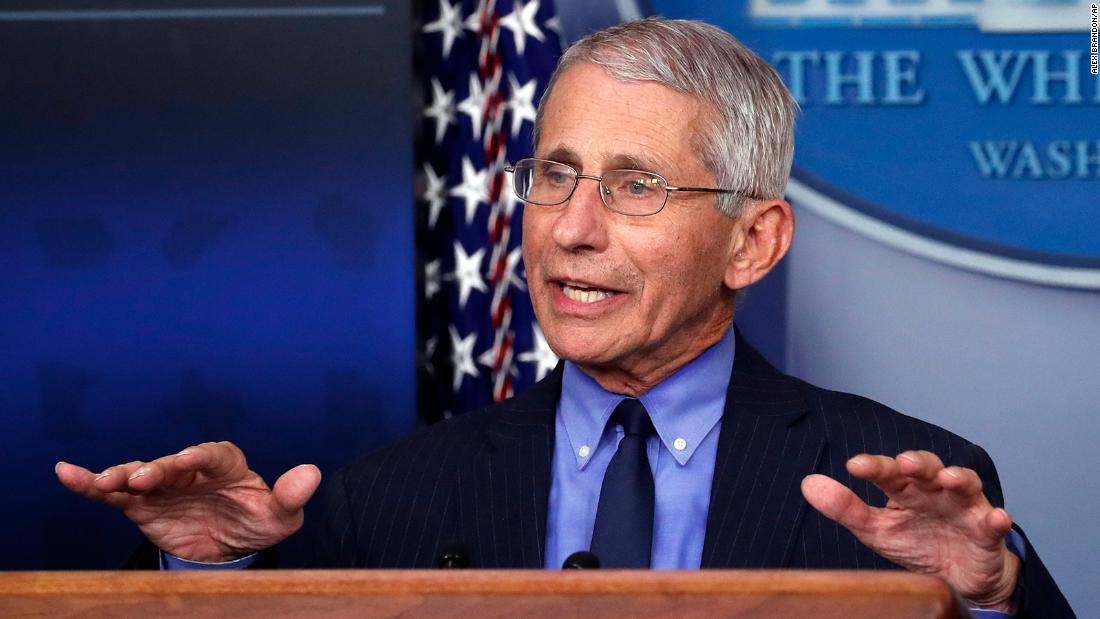 That way, he continued, “you don’t have a situation where you have a test, but it can’t be done because there’s not a swab, or not an extraction media or not the right vial — all of those things got to be in place.”

“I am not overly confident right now at all, that we have what it takes to do that,” Fauci added.

During Thursday’s coronavirus task force news briefing — which Fauci was not at — Trump addressed Fauci’s remarks and said he thinks the country is doing “a great job.”

“I don’t agree with him on that, no, I think we’re doing a great job on testing,” Trump said.

Fauci’s comments run counter to Trump’s regular assurances that American coronavirus testing is on solid footing, including on Wednesday when he told reporters “we’re doing more testing, I think, than probably any of the governors want.” Trump and his political allies have touted the total number of coronavirus tests conducted in the US but the country still lags behind Italy in per capita tests performed

Fauci’s comments also come as several governors look to partially reopen their states’ economies by loosening some restrictions aimed at limiting the spread of the virus — despite concerns of subsequent increases in coronavirus cases and vacillating support from the administration. Public health experts widely agree that to control the epidemic in the absence of strict social distancing measures, states and localities will need to build the capacity for additional testing and contact tracing.
Two different plans for reopening society have said that the United States will have to be able to perform millions of coronavirus tests each week before restrictions can be safely lifted — a considerable leap from the approximately 4 million coronavirus tests the US has performed so far, as some governors report continued shortages of the materials needed to run tests, from chemical reagents to swabs.

“We’re getting better and better at it, as the weeks go by, but we are not in a situation where we say we’re exactly where we want to be with regard to testing,” he said, adding that “I think we’re going to get there, but we’re not there yet.”

Fauci also voiced commitment to his role when asked, in light of his disagreements with Trump on issues including the potential of the drug hydroxychloroquine, whether he had ever been concerned that scientific data hadn’t taken priority when determining response efforts.

“It’s a complicated situation,” he said. “I give the scientific and public health advice based on evidence,” given his background as a scientist and physician with experience addressing multiple outbreaks.

“I will continue to do that, and I think that for the most part, you’re going to see that is going to be the driving force,” Fauci added. “As much as there’s a lot of noise out there about agreements or disagreements, in fact the evidence-based recommendations in the end will always prevail.”

CNN’s Arman Azad and Paul LeBlanc contributed to this report.