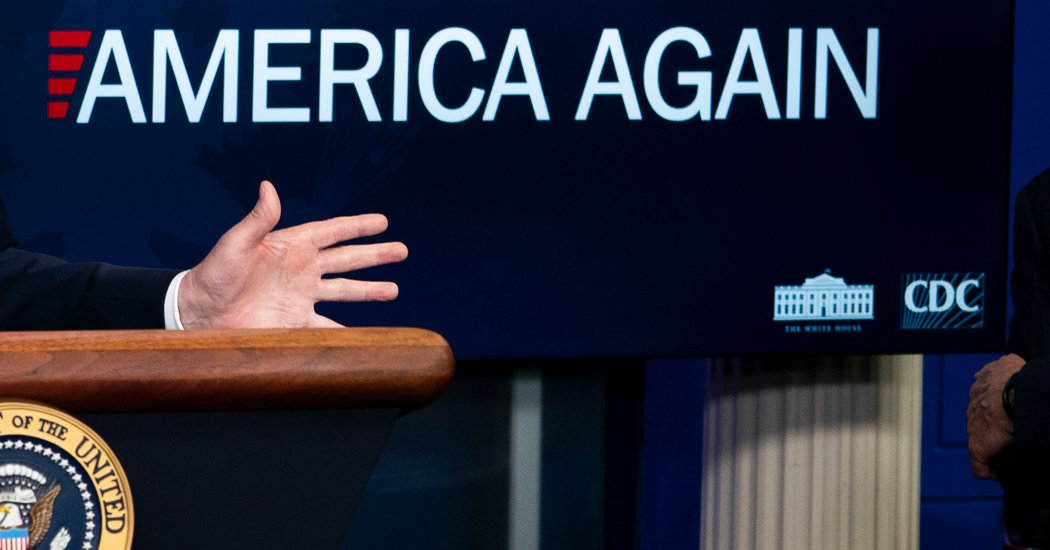 A few weeks ago, as the president received some of the highest marks of his presidency, we wrote about a “Trump bump.”

Over the past few weeks, that bump has turned into a fairly distinct slump, as President Trump’s approval ratings returned to where they were before the pandemic began.

Typically, during a national crisis, leaders get a boost in their numbers, as a result of the rally-around-the-flag moment. That’s been happening both in the U.S. and around the world.

Unlike Mr. Trump, leaders in Europe and across the globe have seen their support rise to record highs. Even in Italy, one of the countries hit hardest by the virus, Prime Minister Giuseppe Conte has hit a remarkable 71 percent approval rating, up 27 points.

At home, governors are getting marks far higher than Mr. Trump, with majorities in state polls saying they approve of how their governor is handling the crisis.

Mr. Trump, meanwhile, has quickly returned to his baseline level of support, which has averaged around 40 percent. The fact that a majority of Americans see his early response to the virus as inadequate suggests that his numbers could decline further if the situation worsens, given that the current situation with the virus can be traced back to the steps taken early on.

Conservatives say Mr. Trump could improve his ratings — and his chances at re-election — by swiftly reopening the country. They point to protests happening around the country in which demonstrators storm state capitols and clog streets as a sign that some Americans are growing frustrated by the restrictions and are worried about the economic impact. So far, polling has shown that these protesters represent only a small minority of Americans — or even of all Republicans.

But some right-wing activists argue that those numbers are beginning to shift away from backing the most severe restrictions.

“The political side is going to start settling out in the next month,” said Adam Brandon, president of FreedomWorks, a conservative group involved with the demonstrations that has been polling on the stay-at-home orders. “In the long run, if the president opens it up in the right way in the next month to six weeks, the American people are going to support that.”

Of course, reopening carries serious risks. Public health officials and governors warn that states lack the kind of widespread testing to control the virus. Some of those states may not simply have experienced the height of the pandemic yet, as the disease spreads from heavily Democratic places like New York and California into more rural, Republican states.

An even broader flare-up of the disease could quickly turn a slump into stagnation — both for the economy and the president.

Is America ready to reopen?

The country is at the start of what’s likely to be a long political fight over when to begin reopening.

In California, the stay-at-home order has no end date. In Georgia, Gov. Brian Kemp is planning to start reopening this Friday.

We want to hear from you! Is America ready to open for business? Or, do you think the lockdown needs to last a little longer?

Write me at onpolitics@nytimes.com and your response could be featured in a future newsletter. Be sure to include your name and location. And if you’re so inclined, tell us how you’ve been managing life, work and sanity in the coronavirus era.

There are a lot of heroes in this moment. Adam Hill and Neena Budhraja in Greenpoint, Brooklyn, are two of them.

Were you forwarded this newsletter? Sign up here to get it delivered to your inbox.

Thanks for reading. On Politics is your guide to the political news cycle, delivering clarity from the chaos.

Is there anything you think we’re missing? Anything you want to see more of? We’d love to hear from you. Email us at onpolitics@nytimes.com.

Lifting Of Lockdown Will Save Our Economy From Recession – Prof.Quartey | Economy

Lifting Of Lockdown Will Save Our Economy From Recession - Prof.Quartey | Economy