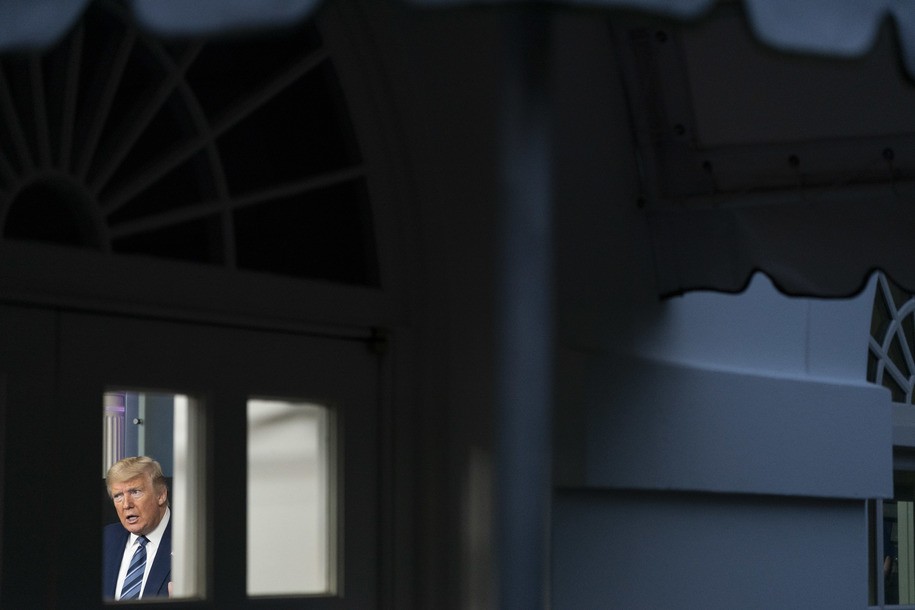 Some of the amazing revelations of the coronavirus disaster have been just how impotent Trump is, how afraid he is of action, how paralyzed he is with fear.

Asked time and time again what he’s done in response to all the warning signs, there are two responses: 1) “Lots of things,” and when pressed to list those things, 2) he closed the border with China. (Aside from the fact that he didn’t really close it, it was a partial closure, and aside from the fact that he did so too late, when the virus was already in the country.) This exchange among public health officials who are trying to desperately get the administration to act is instructive:

“’Can anyone justify the European travel restriction, specifically?’ Bossert wrote to the group on March 11. ‘Seriously, is there any benefit? I don’t see it, but I’m hoping there is something I don’t know.’”

“’Fuck no,’ Lawler responded on March 12. ‘This is the absolute wrong move.’ Several other people chimed in, noting the total lack of benefit along with the missed opportunity to do something useful since ‘plenty of disease’ had already arrived in the U.S.’”

But closing borders—something Trump’s racist administration found easy enough to do—seemed like “doing something,” and certainly something Trump could sell to his racist and xenophobic supporters as “action.” Yet it did nothing to address the virus already in the country, and on that front, Trump did worse than nothing: we were actually exporting medical protective equipment to other countries. Trump’s inaction was the best ally the coronavirus could’ve ever hoped for, which is why it’s actually possible to quantify the deaths that can be directly attributed to Trump. The answer? Most of them.

Play the graph. Even assuming we “just” have 60,000 dead, 90% of those deaths are directly attributable to Trump’s inaction.

Think about it: Let’s say he acts decisively and shuts the country down. “Only” 6,000 people die, but we’re all holed up in our homes with Depression-level unemployment and mass economic devastation. In Trump’s calculation, he’d be directly at fault for destroying the economy. And with the low number of deaths, it would seem unjustifiable.

And we don’t even have to guess at that. Look at Michigan Republicans attacking their Democratic governor even though Michigan has one of the worst death tolls in the country from the virus:

Thousands of people from all over Michigan are converging on our state Capitol today to protest the governorÃ¢ÂÂs restrictive Ã¢ÂÂStay HomeÃ¢ÂÂ order and get their voices, and car horns, heard. #OperationGridlock pic.twitter.com/bgjH4wKCUQ

Reporter: Joe Biden is now the presumptive Democratic nominee. When will he get a briefing on the coronavirus situation?

Everyone fails except Trump. He can only be failed.

But what’s this—now Trump wants to take action by “reopening” the country at the end of the month?

Remember, Trump can’t reopen what he never shut down. He did declare himself dictator, said his power was absolute as president, but had to embarrassingly admit defeat a day later. Well, almost. He backtracked Trump-style, without admitting he was wrong:

I, myself, also authorized every governor to reopen when they deem it possible. In addition, I authorize the Supreme Court to make rulings on the law. And I authorize Congress to pass laws. It’s fun to randomly authorize things!

Blue states won’t listen to him. Heck, they’re organizing against him to get the resources they need, to make the decisions that need to be made based on sound science and data. Problem is, red state governors will slavishly follow his lead, so Florida beaches will reopen, restaurants will open back up, bars will fill up. Who knows—the NFL might play in full stadiums in certain states. And the virus, already a partisan issue, will only become more so.

The narrative is easy: The libs are trying to use the virus to tank the economy, all of it to make Trump look bad.

But Trump is Trump. And as we already established up above, he’s deathly afraid to make decisions. He’s deathly afraid of accountability. He’s deathly afraid of being blamed. So he won’t decisively step up to the podium and say: “We’re opening up the economy, it’s my decision, and the buck stops here!” That would mean that the resultant death toll would be on him and him alone. Instead, this is happening: “Trump’s advisers are trying to shield the president from political accountability should his move to reopen the economy prove premature and result in lost lives, and so they are trying to mobilize business executives, economists and other prominent figures to buy into the eventual White House plan, so that if it does not work, the blame can be shared broadly.” (Emphasis mine.)

If it worked, of course, the credit wouldn’t be shared broadly. That’s not how Trump works. Heck, he’s been taking credit for what the governors have been able to accomplish, things that had nothing to do with him.

Rather, it’s all about protecting him from the negative consequences of his own actions. The buck will never stop at his desk. Kerry Eleveld calls it “Operation Scapegoat,” which sounds about right.

Trump was impeached because of his scheme to get Ukraine to make up an investigation into Joe Biden’s son, because he doesn’t have the confidence to run and win on his own meager accomplishments. That was a scheme hatched out of fear and desperation.

And once again, here we are, with the nation in the throes of a mass-death event, and we have a president acting out of fear and desperation.

We could ask Trump to heed FDR’s famous adage about fear, but he’d be too stupid to get it. He did just compare himself favorably to the captain in Mutiny on the Bounty. He’s a stupid, stupid man. And in any case, he’d just use it as an opportunity to blame FDR for Trump’s own problems today. It’s tough being president when the whole world fails to make you a success.