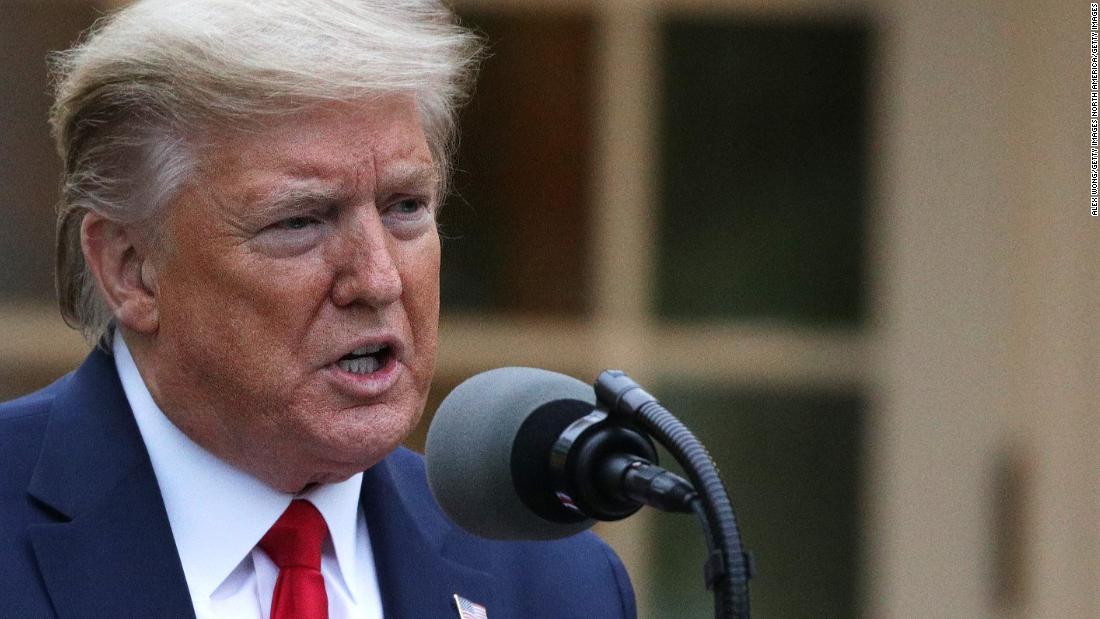 The call, one of a series with various sectors on Wednesday, was the first task force teleconference aimed at devising a strategy for reopening the country. The call lasted for about an hour and had dozens of participants from the banking, food, hospitality and retail sectors, many of whom lauded the President and his administration for their efforts to combat coronavirus and jump-start the economy, this person said.

Those allies are convinced that internal discussions on the coronavirus task force, and the information it provides the President, are overly weighted toward models and worst-case public health scenarios. They had hoped another panel inside the White House focused on the economic effects of the pandemic might lend equilibrium.

Some of Trump’s advisers also hoped having the imprimatur of American industry on White House decision-making might lend credibility — and cover — to whatever decision Trump announces on how and when to recommend reopening certain portions of the country, which some fear could lead to new outbreaks if rushed out too quickly.

But uncertainty about the new task force prevailed from nearly the moment Trump said he was considering it on April 5.

“Thinking about it. Getting a group of people,” Trump said. “And we have to open our country.”

“I think we need a 2nd task force assembled at direction of POTUS to look ahead to reopening of the economy,” wrote Dana Perino, the Fox News host and press secretary to President George W. Bush, two Saturdays ago.

And so began a process that ended in a twilight Rose Garden press conference on Tuesday with Trump rattling off names of top American executives he said would advise him on reopening the country. Some later said they had no idea they’d been included. Many indicated confusion on what, specifically, they were being tapped to do.

The formation of Trump’s “Opening the Country Council” embodied the chaotic and factionalized approach that has marked much of the administration’s response to the coronavirus pandemic. Intent on reviving a stalled economy and mindful of his reelection prospects, Trump has repeatedly sought the advice of America’s industry titans as he wages war on an “invisible enemy.” But formalizing his outreach proved messy and the results of the new effort remain uncertain.

Many of Trump’s aides took his interest in a task force to mean a panel comprised mostly of administration officials, including members of the Cabinet and economy-focused White House staff. To many it appeared that Mark Meadows, the new chief of staff, would lead the effort. And some aides indicated it was likely that Ivanka Trump, who has focused on small business, and Jared Kushner, who leads his own task force on supplies, would be involved.

But Trump also envisioned some of America’s most prominent industry titans participating, picturing a panel comprised of “great business leaders, great doctors” to help map out how the country might emerge from the coronavirus shutdown.

It was never clear internally how the new panel would interface with the existing White House coronavirus task force, which is led by Vice President Mike Pence and includes a number of the President’s economic advisers.

Trump seemed mindful of distinguishing the two bodies, telling reporters last week he was naming the new panel the “Opening the Country Council” to avoid confusion with “Mike’s task force.”

But in practice, it remains the coronavirus task force that is weighing new recommendations on easing social distancing guidelines and returning to work, not the panel of business leaders Trump listed on Tuesday.

The details of the committee changed several times in the days before Trump listed off names in the Rose Garden, one official told CNN. Who would participate and what they would do remained fluid even after Trump said he would formally announce the council.

“It’s a mess right now,” someone in close contact with the White House said on the evening before the names were announced.

That evening, Trump and Treasury Secretary Steven Mnuchin reviewed a list of more than 100 names to include in the group, but did not formally invite anyone to participate by close-of-business. In a briefing, the President signaled he was planning to divide the new panel into separate “committees” based on sector.

Convening such a group met several hurdles, including questions of how legally executives from the private sector could be involved in government decision-making. Some outside figures were also hesitant to join the precarious endeavor to reopen the country, though many business officials have told the White House they agree it should happen soon.

Business leaders have been hesitant to formally tie themselves to the Trump administration in the past, and often prefer to keep their relationship with the President private. The business councils Trump formed at the onset of his administration disintegrated after he blamed “many sides” for white supremacist violence in Charlottesville, Virginia, in 2017. Many of the corporate leaders fled the groups after the President’s remarks, though he later claimed he had dissolved them on his own.

On Tuesday, Trump spent several minutes at his afternoon briefing listing the names of executives from nearly every American business sector, saying he would be speaking with them on the phone to discuss reviving a flagging economy.

It included American technologists such as Tim Cook of Apple and Jeff Bezos of Amazon — the latter a frequent target of Trump’s criticism.

Some business leaders discovered they were part of Trump’s council only when the President read off their names in the Rose Garden, said one person on the list and two others close to those named.

A spokeswoman for AFL-CIO President Richard Trumka says he was not asked before being put on the White House’s list of names.

Others only learned in the moments before Trump made the announcement public.

“We got, maybe, 10 minutes advance warning that we were on the list,” said one person on the list. “We were listening to the President listing off the names and that’s about when they sent the list.”

Others described the outreach to executives as chaotic.

“We got a heads up that there would be a call, but we got absolutely no information of what would be discussed, or what the nature of this call is,” said another person who was included.

This person said that there is a lack of clarity as far as whether this group will be asked to form an economic task force subcommittee aimed at reopening the country, or if they will just be asked to provide general input as a group. “We asked around and a lot of people weren’t aware of what to expect,” this person said.

“The White House is just making sh*t up,” said one person close to an executive who was invited to one of several calls the President convened with members of the group on Tuesday. “The White House was throwing names against the wall and seeing what would stick.”

It was particularly challenging for some of the bank CEOs to join the calls. Goldman Sachs CEO David Solomon and Citi CEO Michael Corbat couldn’t make it because their banks hosted earning calls around the same time as the White House call.

“Who is organizing a call with banking executives in the middle of earnings week?” said another one of the sources.

Even after the calls, confusion remained as to what the White House wanted from the CEOs.

“There was no specific ask from Trump and no clarity on what’s next — how the groups work,” said one of the people who was briefed after the 10 a.m. ET call.

The discussion was very surface-level, said the person who added that Trump spoke about the importance of testing and enhanced cleaning.

At least one of the executives who dialed into a call said the phone line didn’t work.

This story has been updated with additional reporting Wednesday.