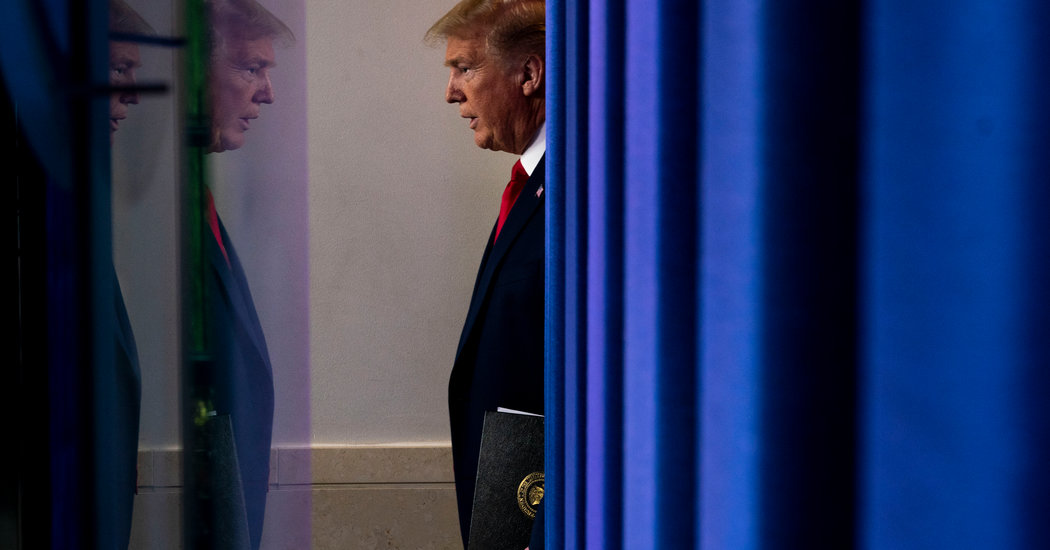 WASHINGTON — President Trump said on Monday evening that he intended to close the United States to people trying to immigrate into the country to live and work, a drastic move that he said would protect American workers from foreign competition once the nation’s economy began to recover from the shutdown caused by the coronavirus outbreak.

“In light of the attack from the Invisible Enemy, as well as the need to protect the jobs of our GREAT American Citizens,” Mr. Trump wrote on Twitter, “I will be signing an Executive Order to temporarily suspend immigration into the United States!”

In recent weeks, the Trump administration has used health concerns to justify aggressively restricting immigration. Even before the tweet, it had expanded travel restrictions, slowed visa processing and moved to swiftly bar asylum seekers and undocumented immigrants from entering the country, alarming immigration advocates who have said that Mr. Trump and his advisers are using a global pandemic to further hard-line immigration policies.

But the president’s late-night announcement on Monday signals his most wide-ranging attempt yet to seal off the country from the rest of the world. A formal order temporarily barring the provision of new green cards and work visas could come as early as the next few days, according to several people familiar with the plan.

Under such an executive order, the Trump administration would no longer approve any applications from foreigners to live and work in the United States for an undetermined period of time, effectively shutting down the legal immigration system in the same way the president has long advocated closing the borders to illegal immigration. It was not immediately clear what legal basis Mr. Trump would claim to justify shutting down most immigration.

Workers who have for years received visas to perform specialized jobs in the United States would also be denied permission to arrive, though some workers in some industries deemed critical could be exempted from the ban, the people familiar with the president’s discussion said.

Several people familiar with the president’s plans said the Department of Homeland Security was separately weighing a large expansion of travel restrictions that already prohibited travelers from Europe and China. The restrictions would significantly shrink the number of people able to come to the United States for short-term visits.

Mr. Trump and his advisers have argued inside the White House that doing more to bar people from other countries from coming into the United States, either for short-term visits or to live and work in the country for longer periods, could help limit the number of infected people who arrive from potential coronavirus hot spots around the world. And they argue that it could relieve pressure on the American health care system.

But Mr. Trump’s primary focus appears to be on protecting American workers as the virus ravages what had been a rapidly growing job market.

Even before the pandemic, the president and some of his most hard-line advisers had been eager to reduce legal immigration, arguing that Mr. Trump’s “America First” campaign pledge should be seen as protecting native-born Americans from having to compete with foreign workers.

Stephen Miller, the architect of the president’s immigration agenda, has pushed repeatedly for regulations and executive actions that would limit the immigration allowed each year, arguing that immigrants are a drain on American society, drive down wages and take jobs from native-born Americans.

And the president’s restrictionist allies on Capitol Hill quickly praised word of his actions. Senator Tom Cotton, Republican of Arkansas, said on Twitter: “22 million Americans have lost their jobs in the last month because of the China virus. Let’s help them get back to work before we import more foreigners to compete for their jobs.”

Immigrant rights groups angrily dispute the claim that immigration is bad for American workers, pointing to research that shows there is little connection between immigration and wages, and stressing the benefits of America’s immigrant culture. Charanya Krishnaswami, the advocacy director for the Americas at Amnesty International USA, responded to the president’s tweet with one of her own.

“When you’re a xenophobe, bans on migration are the only tired, failed, hateful solution you can think of,” Ms. Krishnaswami wrote. “Suspending immigration won’t make the US — which currently leads among COVID cases worldwide — safe. Our policies need to be grounded in public health, not bigotry.”

Mr. Trump’s denigration of migrants was the centerpiece of his 2016 presidential campaign, and his assault on the nation’s immigration system was a defining feature of his first term in office. As he seeks re-election to a second term, Mr. Trump has made clear that he intends to energize his supporters by continuing to stoke a fear of immigrants.

In the past several months, Mr. Trump has justified sealing the United States to migrants by highlighting the risk of spreading the coronavirus, even as his administration has been widely criticized for not taking precautions this year to prevent an outbreak.

At the end of January, Mr. Trump blocked some travel from China, citing concerns about the spread of the virus. He later extended travel restrictions to most of Europe.

Mr. Trump used authority granted to his surgeon general to immediately turn back migrants and asylum seekers to their home countries, even though the Supreme Court refused to allow a similar policy in 2018. His administration has leaned into the policy, even rapidly turning away children who cross the border alone.

Weeks later, Mr. Trump ordered the State Department to issue visa sanctions against any country that refused to accept an immigrant the administration wanted to deport.

Since taking office, Mr. Trump has carried out some consequential immigration policies. In January, the president expanded his travel restrictions to 13 countries, virtually blocking immigration from Africa’s most populous nation, Nigeria.

That same month, the Supreme Court allowed the administration to move forward with a wealth test that would deny green cards to immigrants who are thought to be likely to make even occasional and minor use of public benefits like Medicaid, food stamps and housing vouchers. Many advocates have said the so-called public charge rule has discouraged immigrants from seeking medical assistance at a time when the administration’s top health officials are encouraging Americans to be vigilant for symptoms of the virus.

Franita Tolson, who studies constitutional and election law at the University of Southern California, said in an interview that Mr. Trump’s latest tweet continues a well-worn pattern of issuing broad mandates against immigrants, often as a base-pleasing political cudgel, only to later rework the orders under mounting legal pressure.

Legally, she said, the administration has a habit of working in reverse: issuing sweeping initiatives, and vetting them afterward.

“He tweets out a broad tweet without details, and the administration tailors it to figure out what might pass judicial review,” Ms. Tolson said. She added that Mr. Trump’s latest attempt to issue a restrictive order was sure to meet legal challenges. “Given our infection rate and the lack of testing, he’s taking advantage of a national crisis.”