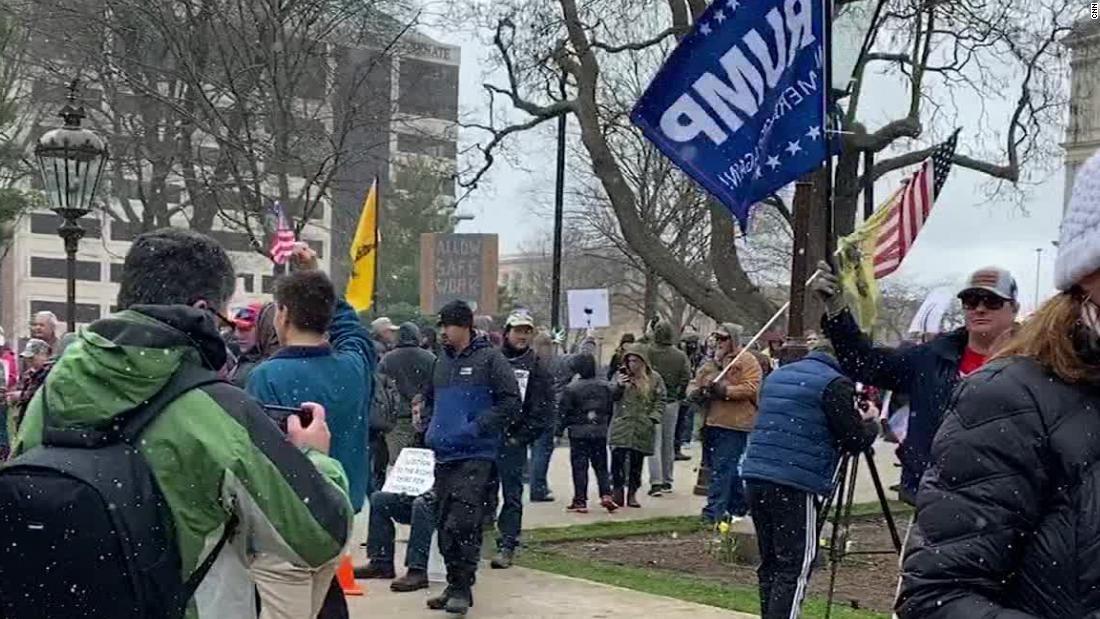 Success creates second-guessing. Trump’s anxious efforts to get the economy opened even before the curve of Covid-19 cases is flattened, and his chronic spreading of fake promises about treatments, will only feed that growing angst.

The more successful the federal and state governments are at flattening the coronavirus infection curve, the more people will question whether halting the nation’s economy was necessary in the first place.

Despite the deniers, even Trump is not rushing to open things up. Read more about his announcement Thursday of new guidelines on reopening the country.
The guidance is not unlike what California Gov. Gavin Newsom announced recently as his own criteria. Read it here.

The bottom line: Trump and Newsom appear to agree that the worst of this must pass, different parts of the country will open earlier than others, and testing and tracing of cases must improve.

The doubters. But another 5.2 million people filed for unemployment last week, bringing the total since mid-March to 22 million. That is an astonishing number. As the economy continues its free fall, you can feel the backlash grow. The government has already blown through the $349 billion it earmarked to help small businesses during this mess.

We’re all going to be paying for this for a very long time.

Protesting public health — CNN’s Jeff Zeleny writes a must-read profile of Michigan Gov. Gretchen Whitmer, who has been on the job for only a few months but is already turning into a key national figure.

Drivers jammed into Michigan’s capital and surrounded the state Capitol in a protest against her stay-at-home order that featured neither face masks nor social distancing, but rather the honking of horns that could be heard inside.

Zeleny: “The collision between a public health battle and a political one, which played out for more than five hours here on Wednesday, underscores the boiling tensions of a restless nation struggling with the wisdom of reopening the economy before the deadly pandemic subsides, even as President Donald Trump moves closer to easing national guidelines for social distancing.

Regional authorities — Whitmer is among the bipartisan group of seven Midwestern governors who have said they will coordinate their efforts to slowly reopen society.

It mirrors a similar announcement by governors on the East and West costs, completing the emergence of ad hoc regional pacts in place of national guidance from a skeptical President.

Fox News turns again. In February and much of March the conservative outlet fed the coronavirus deniers, then took things seriously when New York became ground zero for the pandemic in the US, but it has turned again.

In their warped telling, people who venture out in public aren’t vectors for infection but rather freedom fighters standing up to oppression.

“Soon Marylanders, Virginians, etc will stand for their right to work, travel, assemble, socialize and worship? Massive long lasting damage is piling up day after day as many ‘experts’ continue to get the virus analysis wrong,” Ingraham wrote in another tweet.

The disease has been felt much differently by different groups of people. African Americans and Latinos are much more concerned they will personally get the disease, that they’ll unknowingly spread it, according to a recent Pew poll. A Gallup poll suggests widespread respect for social distancing, but party identification is the largest differentiator and Republicans are more likely to say they’ll immediately get back to normal after restrictions are lifted.
Those perceptions could change. See the recent reports about a rise of coronavirus in rural America.

CNN’s Jeff Zeleny is the rare person who has traveled lately. Here’s what he had to say about the protest:

What set this rally apart

ZW: First and most important, the thing that struck me most in your story was this apparent backlash to social distance in the form of a protest that could literally be heard from the governor’s office. Did that feel different to you than a normal partisan disagreement? Was it more grassroots or groundswell?

JZ: The protest was large, but the thing that struck me the most is that it went on and on, with honking horns, blaring music and raucous jeers for more than five hours. It was protest-by-parade — definitely not organic, considering it was organized by the Michigan Conservative Coalition, but the anger was absolutely real. It had the feel of a Trump rally from 2016 and a Tea Party rally from 2010 — back at a time when rallies were the norm.

What was striking was dozens upon dozens of people who stood on steps of the Capitol and the surrounding sidewalk, defying not only the strict stay-at-home orders, but also blatantly ignoring basic medical common sense.

There’s no question the economic pain is real in Michigan, with about one-quarter of the state’s eligible workforce seeking some type of unemployment help. But the Village People’s “YMCA,” which blasted from a Trump trailer that’s often seen at the President’s campaign rallies, seemed oddly discordant on a day that the state’s death toll hovered around 2,000 people.

ZW: Second, you’re the first person I’ve talked to recently that has been away from their house. What was it like in an airport? In a hotel? Or did you avoid both?

JZ: I flew from Reagan National in Washington to the Detroit Metro Airport, both of which were virtually empty. The biggest inconvenience: No coffee for my 6 a.m. flight on Wednesday, since all restaurants were closed. And only bottled water, with a side of Biscotti and Purell wipes served in a plastic bag, on the plane. But I’m certainly not complaining, given the janitorial staff and airline workers still on duty as before.

I travel often — or I did before the pandemic — but I don’t believe I’ve ever stayed in an entirely empty hotel. The front desk manager told me only one other room was occupied, which was for my colleague Jake Carpenter, a CNN photojournalist. I limited my trip to one night and ordered pizza and salad from a nearby restaurant in East Lansing.

ZW: Third, how do you interview people in person and social distance?

JZ: I mainly just observed people at the rally, having conversations with only a couple people from a respectable distance. Their hand-made signs made their opinions easily known.

I traveled to Lansing to interview the governor, which we did from six feet away in two chairs, with two cameras. I spent time in her office, where I also stayed at a safe distance.

Heading toward a new normal, or dystopia?

It sounds like science fiction. But this is real. CNN’s Ray Sanchez tried to envision what life will be like in the near term. What was most striking was his description of how contact tracing — tracking whether you’ve come into contact with the disease — could work in practice.

Forget about privacy. The tracing of people with regard to coronavirus is underway in China and some other places. In China, the use of a color-coded badge on your phone dictates where you can go. So the question for the US and other countries is whether people will have to prove their health to return to normal ways of life.

Don’t trust. Verify. Want to eat in a restaurant? You’ll essentially have to prove that you’re clean. Want to get on a plane? You might have to take a test.

This is Orwell come to life. It’s a Philip K. Dick-level societal shift. Is that person walking next to you infected? Do you have a right to know? I’d take an online philosophy course on the future of privacy.

Corporations like Google and Facebook already track your movements, by the way. Apple and Google are working on ways to make your phone into a coronavirus tracker.
It’s like the movie “Gattaca,” where Ethan Hawke’s character buys blood from Jude Law so that he can deceive authorities about his genetic deficiency and take part in society.

Low-tech alternatives — Sanchez, borrowing from some reports and suggestions, includes these ideas for the near term:

Who got it right?

Every country has experienced coronavirus somewhat differently, but some have escaped much of the death, as well as the social and economic upheaval, that has characterized the US experience. CNN looked at what Taiwan, Germany, Iceland and South Korea did differently. This is a long story and worth reading. But the 12 key lessons appear to be:

The reality is that the world has seen a series of disease outbreaks in recent years — SARS, Ebola, Zika. So the big question for this country now is how much we can learn from the Covid-19 experience and what we do to get ourselves better prepared for the next time.