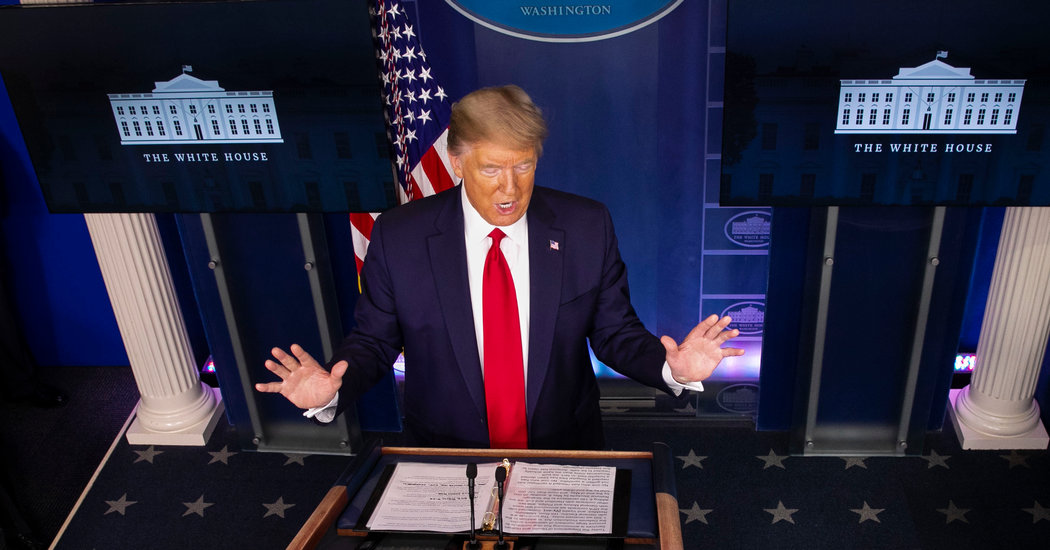 While the federal government has authority over interstate and foreign quarantine measures, states have the primary authority to impose and enforce quarantine and isolation measures within their own borders, as part of the police powers conferred to states by the 10th Amendment of the Constitution, according to the Congressional Research Service and the Centers for Disease Control and Prevention.

The Federal Emergency Management Agency, in batting down untrue rumors on its website, noted that “states and cities are responsible for announcing curfews, shelters in place, or other restrictions and safety measures.” Mr. Trump’s claims were also contradicted by Gov. Larry Hogan of Maryland and Gov. Chris Sununu of New Hampshire, both Republicans, who said on Monday that the decision to lift measures was up to the states.

“Just last week, we were asking: Why no national lockdown? The answer is that state governors are responsible for the health of their populations, as Trump himself has said,” said Polly J. Price, a professor of global health and law at Emory University. “Is Trump’s next step to nationalize the manicure industry? Because unless he is going to nationalize specific businesses, like wartime industry, this is a state matter.”

Even in a hypothetical scenario, Mr. Trump would be limited in how he can act. Congress could conceivably pass a law on interstate commerce that would effectively compel states to rescind their stay-at-home orders, but the president could not unilaterally act to do so. Similarly, while it’s possible that classified draft documents or the Justice Department’s Office of Legal Counsel have argued for an expansion of executive power including authority to override governors, such powers have yet to be invoked and could still be challenged in court.

Though Mr. Trump said he could provide “a legal brief” on “numerous provisions” in the Constitution that outline his authority to override governors, the White House did not respond when asked for the brief or other evidence of the president’s claims.

“Nobody is asking for ventilators.”

False. Several governors continued to speak about existing or impending shortages of ventilators and other supplies.

“Everybody still has tremendous needs on personal protective equipment and ventilators and all of these things that you keep hearing about. Everybody’s fighting to find these things all over the — all over the nation and all over the world,” Mr. Hogan said on ABC’s “This Week” on Sunday.